If you’re looking for a slower-paced game than Craps or even Blackjack and want to spend a lot of time gambling without losing an outrageous amount of money, play Pai Gow Poker. Once you comprehend the basics of poker (see Hand Rankings, below), you’ll feel comfortable with this version and be able to relax.

One 52-card deck is used plus one Joker, which can be used only as an Ace or to complete a straight or any flush.

An interesting element of Pai Gow Poker is that any Player can request to be the Banker. In this instance, all Players compare their hands with the new Banker rather than the dealer. The new Banker wins all ties, pays any winners from their own pocket, and collects any losing wagers. However, the casino still collects a 5 percent commission on any winning hands as in Baccarat and Mini-Baccarat. 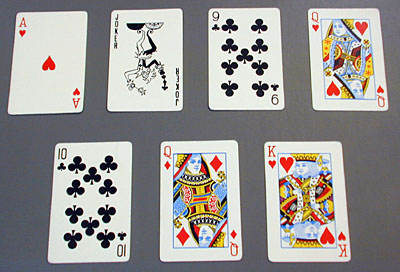 With this example, the chances of beating the dealer’s highest hand are great, but maybe not the second-highest hand. This results in a push, or tie, which extends your playing time.

Another arrangement for the same cards would be the following:

With this example, the highest hand would probably not beat the dealer’s, but the second-highest hand probably would. Again, another push, but nothing lost.

Here’s an arrangement that might win you a hand:

The Straight would almost certainly win, and there is a good chance that a Queen and Ace as the high cards would beat what the dealer has for the second highest hand.

Thank you for subscribing.

we respect your privacy and take protecting it seriously